On 18th November 2020, Tibetan Youth Congress started a 6-day-long Bike Rally from McLeod Ganj to Kinnaur, an Indo-Tibet border region. 50 bikers volunteered to take part in this bike rally which aimed at propagating the message of boycotting made-in-China goods, countering and controlling Chinese intrusions into the Indian territory, and demanding the release of all political prisoners in Driru county of Tibet.

The Indo-Tibet border bike rally was flagged off by Kangra MP Kishan Kapoor and the speaker and deputy speaker of TPiE. During the event, TYC President Mr. Gonpo Dhundup addressed the gathering on the significance of the Indo-Tibet border. He elaborated that China has posed a threat to India’s security since the illegal occupation of Tibet by citing examples of the recent illegal intrusion of the Chinese forces on Indian soil. Thus, the Indo-Tibet bike rally aims to raise awareness among the Indian public about the historical ties between Tibet and India. 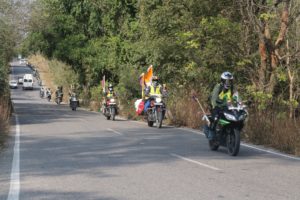 Day 1 of the  Indo-Tibet border bike rally to expose China kicked off on 18th November 2020 from McLeod Ganj. There were about 50 bikers from Dharamshala, Kullu Manali, Dekyiling, Paonta, Shimla, Bir, Delhi, and Rothang. Although there were plenty of other bikers who showed a willingness to participate, TYC kept the number to 50 to signify the 50th Year founding anniversary of the Tibetan Youth Congress.

The bikers stopped for lunch sponsored by Mr. Tsering Wangdue at the Himachal Tourism restaurant in Hamirpur. TYC also addressed the media around the Hamirpur area regarding the Indo-Tibet border rally to expose China. After lunch, the bikers started moving to Bilaspur, the last stop for Day one. 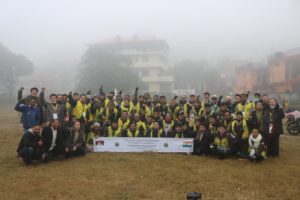 The second day of the Indo-Tibet border bike rally started with greetings from Mr. Sudender, Rampur district president of BJP. The bikers were escorted by PCR vans from Bilaspur. They stopped for a lunch prepared by TYC at Siloo and continued with their journey to Rampur. 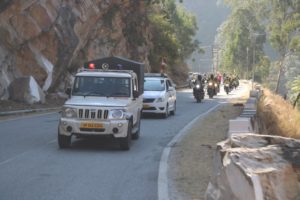 On the third day, the bikers geared for the journey to the Indo-Tibet border in Reckhong Peu. The rally attracted a wide range of media coverage at Rampur. Rampur is a beautiful hill station located 100 km away from Shimla. The area was majorly dominated by the Negi Buddhist Community. Therefore, there were monasteries around the area. The rally started off with a prayer and blessings from one of the monasteries in Rampur.

The bikers then rode towards the Nesang bridge located at the Indo-Tibet border in the Kinnaur district and upon reaching there, TYC President, General Secretary, and Joint Secretary declared the three demands of the Indo-Tibet Border Bike Rally in Tibetan, English, and Hindi respectively. Moreover, they protested against the inhumane and oppressive regime of Communist China. 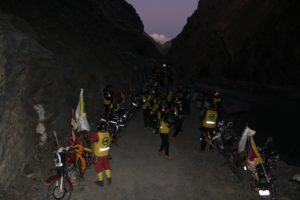 The bikers stayed in Spello for the night. 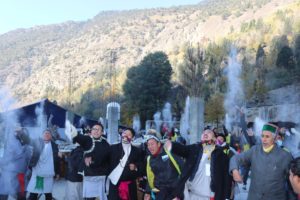 Day four began with a morning prayer session and Sangsol was joined by Mr. Roshan Lal Negi, who also sponsored our stay in Spello and had been a long-time supporter of Tibet. Post-Sangsol, Everyone gathered for a group picture and then rode towards Shimla. The roads were bumpy and the weather was freezing cold. We witnessed a small snowfall in Nagarkot before reaching Shimla.  Despite all odds, the bikers were determined to create awareness about the situation inside Tibet and continuously shouted “Bhoe Gyalo”. After covering a distance of about 260 kilometers, the bikers finally reached Shimla with a warm reception from the people of Shimla. Fourth Day marked the longest ride of the Indo-Tibet border bike rally to expose China.

Day Five of the rally convened with a morning function attended by Mr. V.S Negi, President of the Indo-Tibet Friendship Association (Shimla), Mr. Rakesh Sharma, Deputy Councillor (Shimla), Mr. H.C. Negi, Vice President of Kinnaur and Lahaul Buddhist Association, Chief Representative Officer, Shimla and the leaders of Tibetan NGOs in Shimla. It was cold in Shimla but the rally must go on, so the bikers rode on to Bir, the final destination of our event. It was a 7-hour-long journey and the bikers covered a distance of 207 km. 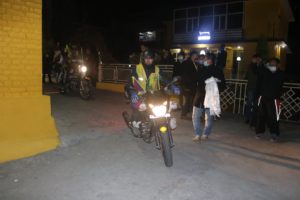 The concluding ceremony of the Indo-Tibet border bike rally to expose China was concluded on 23rd November 2020 at Nyingma Hotel in Bir. The ceremony was attended by Mr. Ajay Ji, BJP President (Mandi District), Executive members of the  Indo-Tibet Friendship Association, Tibetan Settlement Officer (Chauntra), and the leaders of the regional Tibetan NGOs.

The Tibetan Settlement Officer and others offered Khatak to the bikers and organizers as a gesture of appreciation. The ceremony ended with a speech by TYC President Mr. Gonpo Dhundup. 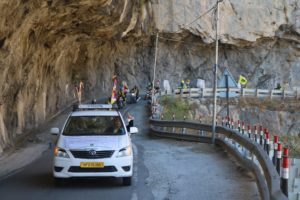 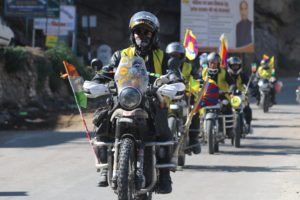 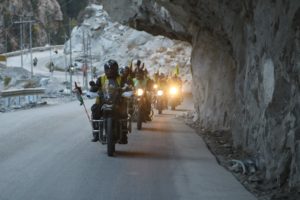 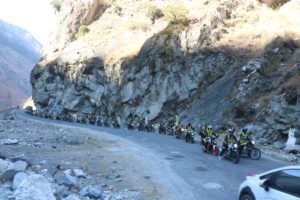 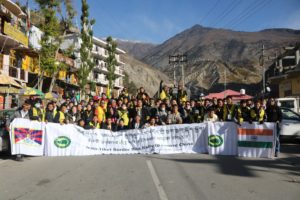