Dharamshala 7 October:  The celebration of the 50th Anniversary of the Tibetan Youth Congress is an occasion to look back, reminisce and reassess its achievements. It is also a time for TYC to review the past obstacles and consolidate its strength to tackle the present and future challenges.

The Golden Jubilee celebration took place in McLeod Ganj, Dharamshala with Mr. Tenzin Geyche Tethong, Co-founder and first President of the Tibetan Youth Congress as the Special Guest, Mr. Sonam Norbu Dagpo, former President and Chief Justice Commissioner, and Mr. Pema Jugney, Speaker of the Tibetan Parliament in exile as the Chief Guest. Apart from that, Former TYC executives or their representatives also attended the event. Due to the coronavirus pandemic, the program was scaled down to a modest event. 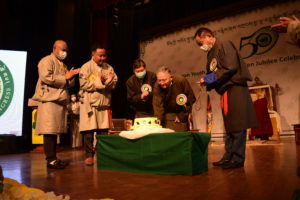 In the opening remarks by the founder and first president of TYC, Mr. Tenzin Geyche Tethong commended the organization for its work for the Tibetan people and commented on China’s growing repressive policies in Tibet. He asked for greater unity amongst Tibetans in exile.

After that, Mr. Sonam Norbu Dagpo, former President and the Chief Justice Commissioner applauded TYC for its commitment to Tibet’s freedom movement and for being the frontrunner organization in organizing campaigns and creating awareness for Tibetans on democracy, voting, and leadership.

Speaker of the TPiE, Mr. Pema Jugney talked about the effectiveness of TYC in providing a platform for young leaders and pointed out how some of the most important and influential leaders had their roots in TYC.

Performance by the Tibetan Institute of Performing Arts (TIPA). 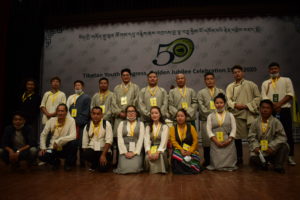 Organizing Committee of the 50th Year founding anniversary of the Tibetan Youth Congress.

Group Picture with the participants of the Golden Jubilee Celebration of TYC at Imperial Hotel.