DHARAMSHALA, June 17: The largest pro-independence group o the Tibetan Diaspora, the Tibetan Youth Congress (TYC) on Sunday elected its new leadership after the tenure of the previous executive members have run its course here at Dharamshala where its headquarters are based.

The seven-person executive members known as the centrex was elected on the last day of the 17th General Body Meeting where 150 delegates from its 45 regional chapters took part in the voting. Gonpo Dhondup was elected the new President with Lobsang Tsering as their new Vice President and Sonam Tsering the new General Secretary.

Dhondup said that while he has no specific agendas outlined at the moment, the new leadership headed by him will strive to continue the work of his predecessors and build on that. He said that during his tenure, he will uphold the core objectives and rules of the organisation that seeks complete independence for Tibet from China.

Outgoing President Tenzing Jigme who was voted at the helm of TYC for two successive tenures from 2013-2019 said that as Tibetans, the new leadership should always put at the fore the importance of the Tibetan leader His Holiness the Dalai Lama in their activities.

He also said that the new leadership should strive to take the standards for its political activities a notch higher in the future and also build alliances with other countries and people who are afflicted by the Chinese regime such as Taiwan, Hong Kong, Philippines and Japan in the hope to form a united coalition against Beijing.

Jigme’s Presidency for the last six years, observers say, has amiably deescalated in many ways than one, the image of the pro-independence group that in the last decade had an image of a staunch opposition of the status-quo of the exile Tibetan set-up. In the last six years, many say that Jigme has been successful in his bid to rekindle positive ties between the larger Tibetan community and the organisation and even having an audience with the Dalai Lama for the members of the organisation.

His predecessor Tsewang Rigzin during the 15th General Body Meeting in 2013 publicly apologized saying TYC as an organisation has never intentionally slandered or belittled His Holiness the Dalai Lama and the Tibetan administration in Exile, in what is now seen as a stormy time for the pro-independence organisation.

The TYC was founded in 1970 and today has the most grassroots reach in the exile Tibetan community by a NGO, with over 40 chapters worldwide and 30,000 members. 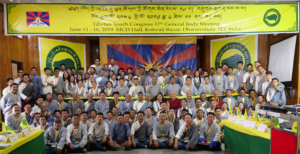