TYC Campaigns for Tibet at UPR Session in Geneva

The 31st Session of the United Nation Human Rights Council’s Universal Periodic Review started on the 5th of November and will go on till the 16th of this month. Yesterday marked China’s third human rights situation review by the United Nations whereby the issue of Tibet witnessed an increased number of diplomatic support from the UN Member States in the UNHRC. 13 States criticized China’s abuses in Tibet, 9 countries raised 12 recommendations regarding China’s Human Rights abuses in Tibet. During China’s second UPR in 2013, 7 States made recommendations relating to Tibet.

Recommendations made by the 9 States on Tibet in 2018

Cease restrictions on Uyghur’s and Tibetans freedom of movement and allow media, UN and foreign official’s access to Xinjiang and Tibet.

End prosecution and persecution on basis of religion or belief for Muslims, Christians, Tibetan Buddhists, and Falun Gong

Denmark recommends the Government to facilitate full access to Xinjiang and Tibet for all relevant UN special procedures.

Respect rights of freedom of freedom of religion and belief, opinion and expression, peaceful assembly and culture also for Tibetans, Uyghurs and other minorities

Respect, protect and fulfill the right to freedom of thought, conscience, and religion in accordance with general comment 22 of the HRC (HR Committee). To this end, New Zealand recommends that China resume the two-way dialogue on Tibet

Take urgent steps to respect the rights of persons belonging to ethnic minorities including the rights to peaceful assembly, to manifest religion and culture, in particular in Xinjiang and Tibet

China should respect all HR of the Tibetan people and other minorities including the importance of a safe, clean, healthy and sustainable environment which is vital for the enjoyment of a number of these rights

Cease interference in the selection and education of religious leaders – including the reincarnation of Tibetan Buddhist lamas.

In addition to the recommendations, Austria, UK and Japan raised Tibet critically in their statement to China. Advanced written questions on Tibet had been raised prior to the review by Belgium, UK, Sweden, USA, Austria, Germany and Switzerland.

The Tibetan Youth Congress (TYC), the largest Non-Governmental Organization in exile has submitted a report on Human Rights Violations in Tibet in collaboration with the Human Rights Network for Taiwan and Tibet (HRNTT). The Joint Report highlighted issues regarding the lack of basic human rights and freedom inside Tibet and how China taking steps to Sinicize whole Tibet. The report also flagged lists of recommendations for the member states and UN Human Rights mandate holders.

As China’s UPR was being held in the UNHRC, Geneva on the 6th November, TYC President Tenzing Jigme with other hundreds of Tibetans, Ughyurs, Southern Mongolians, Taiwanese and Vietnamese protested at the United Nations in Geneva to urge the UN to hold China accountable for their actions in these countries. TYC President Tenzing Jigme spoke at the rally and made two main points;

Third China’s UPR left the Tibetans, Uyghurs, and others with a sense of greater hope to see more numbers of the member state coming up and raising their voice against China for Human Rights Violations and to holding China accountable as a member of the United Nations. 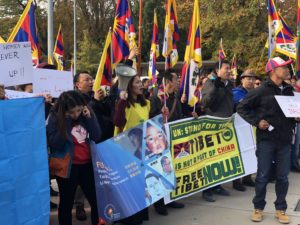 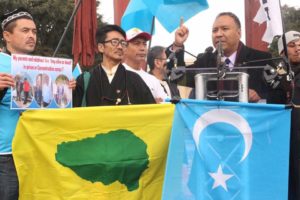 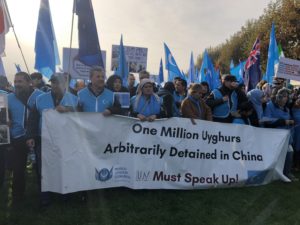 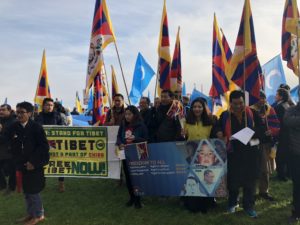 Tibetans holding posters that read ‘We Stand for Tibet’, ‘Tibet is never a part of China’, and Free Tibet Now’. Made by Tibetan Youth Congress.